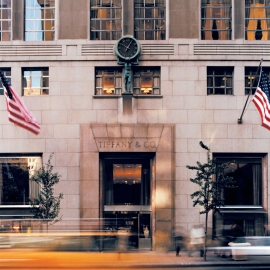 Tiffany & Co. today (March 17) reported its financial results for the full year and the three months (fourth quarter) ended January 31, 2017, which were consistent with its previously issued guidance for the 2016 fiscal year. Worldwide net sales declined 3% in the year and rose 1% in the fourth quarter, while in both periods higher gross margins countered growth in operating expenses. Net earnings per diluted share declined 1% in the full year and 2% in the fourth quarter. The company generated more than $700 million of cash flow from operating activities in the full year.

Michael J. Kowalski, Chairman of the Board and Interim Chief Executive Officer, said, "Despite macroeconomic and geopolitical challenges in the past year that we believe will continue in 2017, we strongly believe that Tiffany's strategies are sound and that we have meaningful growth opportunities. Our management team is focused on accelerating the execution of our strategies to deliver extraordinary products, communications and experiences that will delight our customers around the world. Through strong leadership and this accelerated execution, we believe we are well-positioned to deliver attractive total shareholder return over the long-term."

In Japan, total sales rose 12% to $604 million in the full year and 15% to $185 million in the fourth quarter; comparable store sales increased 16% and 19%, respectively, while wholesale sales declined in both periods. They attributed sales growth in both periods to higher spending by local customers, with declines in spending by Chinese tourists. In the Asia-Pacific region, total sales of $1 billion in the full year were approximately equal to the prior year and total sales of $284 million in the fourth quarter were 9% above the prior year, benefitting from the opening of new stores, with comparable store sales declining 9% and 2%, respectively. During the year, Tiffany's attributed performance in this region to increased purchasing by local customers and declines in spending by foreign tourists. In addition, there was strong retail sales growth in China, increased wholesale sales in Korea, a decelerating rate of retail sales decline in Hong Kong and varying performance in other countries.