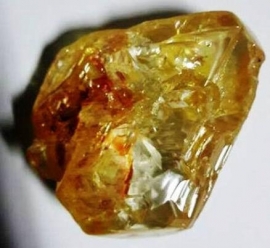 A photograph of the 706-carat diamond (previously reported as 709-ct.) discovered by a Christian pastor in Sierra Leone's eastern Kono region has been published on The Republic of Sierra Leone's State House website. A local chief from Kono handed the stone to President Ernest Bai Koroma on behalf of Emmanuel Momoh who made the discovery. The government plans to auction it. An official statement says, [President Koroma] underscored the importance of selling such a diamond here as it will clearly give the owners what is due them and benefit the country as a whole."

At 706 carats, the diamond is the 13th largest rough diamond ever recovered - right behind the famous 726-carat Jonker Diamond recovered at the Elandsfontein mine in South Africa on January 17, 1934, and just ahead of the 650.80-carat Jubilee Diamond, discovered in 1895 in South Africa - and should be worth millions. It is uncommon for such a stone to be discovered in 'traditional' ways, as most major discoveries come from mining deep kimberlite ore using advanced technology.

The government says the diamond will be sold in Sierra Leone with a "transparent" bidding process to the benefit of the community and country, the statement said. "I have to help the government and my people, so all of us can benefit," presidential spokesman Abdulai Bayraytay quoted the pastor as saying. Even though diamonds can be found in about a quarter of Sierra Leone, the country of about six million people is one of the world's five poorest nations, according to the United Nations.