Why Are Diamond Mining Stocks Struggling? Paul Zimnisky Has An Ideas 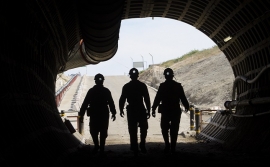 Diamond industry analyst Paul Zimnisky, author of the Zimnisky Global Rough Diamond Price Index, provides his thoughts on the recent struggles of diamond mining stocks. Given what is now being widely considered as a recovery and stabilization of the diamond industry last year, an optimistic post-election U.S. economy and a more stable Chinese economy - all factors beneficial to diamond miners - Zimnisky wonders why the value of a basket of established and relatively popular diamond mining stocks has fallen while the major market proxies are up. He sets out the situation as follows:

1. The effect of India's demonitization has shown up in financial statements. "While the market expected India’s demonetization to have a negative impact on global diamond prices, recently released official sales results from Dominion, Stornoway, and Mountain Province have highlighted the severity of the impact on smaller, lower-quality stones." Indeed, some miners (such as Mountain Province at its first sale of Gahcho Kue diamonds) held back their smaller diamonds as demand and prices fell.

2. Mid-tier mining darling Lucara Diamond gave a bearish view of the diamond market in its Q4 2016 operations update released on February 16. “Supply and demand fundamentals in the diamond market remain unbalanced, resulting in a very cautious market. The large volume of rough diamonds sold into the market in 2016 has not translated into increased sales of polished diamonds. Polished diamond price indices remain at very low levels, restricting the ability for rough diamond prices to see short term and sustainable growth," Lucara wrote. Zimnisky notes that Lucara became one of the most recognizable and promising diamond miners in the world after its recovery of the Lesedi La Rona(1,109-ct. gem quality diamond), and their comments, "have impacted industry sentiment more so than larger company’s like ALROSA and Petra, which have both recently released more bullish views on the current state of the diamond market."

3. "The U.S. Federal Reserve is likely to raise interest rates multiple times this year, which makes bonds a more competitive alternative to dividend yielding stocks. With a high likelihood of the U.S. Federal Reserve raising interest rates on March 15, with subsequent additional hikes in 2017 also expected, there has been some rotation out of higher yielding stocks into fixed income. With Dominion, Lucara, and ALROSA, yielding 4.3%, 3.6%, and 2.4%, respectively, which compares to the S&P 500 yielding 2.2%, these diamond miners are relatively high yielding stocks, and are sensitive to asset class rotation tied to interest rates. In addition, more hawkish monetary policy rhetoric has strengthened the U.S. dollar, which has also put pressure on the diamond miners, most of which are traded in non-U.S. dollars."

4. Commodity stocks such as iron ore, gold, and oil are softening. "Large investors tend to move money in-and-out of asset classes and sectors as a whole, so a general flowing of money out of commodities and related stocks in recent weeks has sympathetically impacted the diamond miners."

5. Bad press. While we could point out any number of examples, Paul Zimnisky sees the Economist’s February 23 article titled, “The Waning Power of the Engagement Ring”, as adding to negative sentiment. "The article points to De Beers no longer controlling supply, the technological advancement of synthetic diamond production, and the Millennial’s lackluster desire for material possessions, as threatening the value of diamonds. While all of these topics are far from new to those in the industry, the widely-distributed article put a negative spin on the longer-term prospects of the diamond industry."