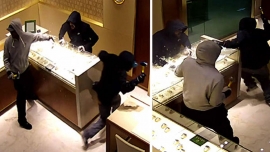 Citing figures from Jewelers Security Alliance, National Jeweler reports that jewelry crime rose 6 percent year-over-year in 2016, to 1,245 reported crimes committed against U.S. jewelry firms, compared with 1,177 in 2015. The losses in dollar terms were roughly equivalent, increasing approximately 5% to $72.4 million. Michelle Graff notes there were a total of six industry homicides in 2016 - five jewelers and one traveling salesman - up from two in 2015, while jewelers killed five robbers, up from three in 2015. This marks the first increase in reported crimes since 2012. John Kennedy, President of JSA, cautions against making too much of the increase noting that the numbers overall still are relatively small and industry crime remains well below what it was in decades past.

Graff lists several notable statistics: the number of grab-and-runs rose 40 percent year-over-year, from 301 in 2015 to 420 in 2016, with this crime accounting for 34 percent of all thefts reported to the JSA. (Theft is defined as the taking of property without force or fear.); the average loss from grab-and-runs was $7,664, with one incident in Colorado resulting in a loss of $118,000 in jewelry; the number of robberies fell from 231 in 2015 to 174 in 2016, a 25 percent decrease. (Robbery is defined as the taking of property by use of force or fear and includes smash-and-grabs as well as armed robberies.); while burglaries were up 12 percent, from 256 to 287. (Burglary is defined as entering a business or residence after closing with the intent to commit a crime).