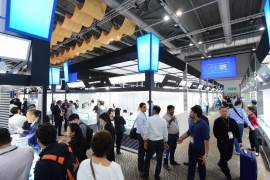 The fourth Hong Kong International Diamond, Gem & Pearl Show (28 February-4 March) and the 34th Hong Kong International Jewellery Show (2-6 March) featured about 4,480 exhibitors, and attracted over 85,000 buyers from 144 countries and regions, up six percent over last year, according to organizer Hong Kong Trade Development Council (HKTDC). More than 33,000 buyers visited the Diamond, Gem & Pearl Show, while some 52,000 visitors attended the Jewellery Show. “Despite economic challenges, especially in the luxury goods market, the two shows attracted a record number of buyers. The exhibitors are also generally satisfied with the results at the two shows,” said Benjamin Chau, Deputy Executive Director, HKTDC. “This demonstrates that the jewelry industry remains confident about business prospects this year."

The HKTDC commissioned an independent onsite survey during the two shows, interviewing more than 1,300 buyers and exhibitors about their views on market prospects and product trends. The survey found that 56% of the respondents expect overall sales this year to be steady, while 28% expect an increase;  69% expect prices to be steady and 23% expect them to rise. For both product categories and product materials, survey respondents expect items with more affordable prices will be more popular. In terms of product categories, survey respondents are mostly optimistic about the prospects of trendy fashion jewelry (72%), followed by jewelry for weddings and special occasions (58%) and precious jewelry (58%). In terms of price range, 54% of the respondents expect products priced from US$101 - $500 to have the greatest potential this year, followed by products in the US$501 - $1,000 (51%) price range. Mainland China, United States and Western Europe are the most optimisitc markets for jewelry, diamonds are the most popular gemstone, and price fluctuations of raw materials are seen as the main challenges.

Several reports note that diamond demand was up and traders are optimistic after the show. Rapaport News notes, "Buyers did better than sellers as suppliers were willing to compromise on price in order to generate liquidity and reduce inventory before new better-quality polished production becomes available." All in all, they note "positive" and "optimistic" sentiments prevailing post-trade fair in the U.S., Belgium, Israel, India and Hong Kong itself. According to the news site, "Chinese independent retailers shifting to lower price-points signaling a change in consumer demand," while, "Yuan depreciation against the dollar (-6.4% in the past year, -0.5% this week) is limiting buyers’ budgets."