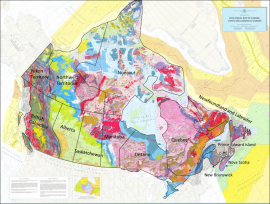 Winnipeg geologists discovered the very first micro-diamonds in the Manitoba province in Canada. The discovery was made by an informal consortium of Manitoba and Alberta prospectors in the northeastern part of the province.

According to Ruth Bezys, president of the Prospectors and Developers Association based in Winnipeg, the discovery was made by the Lynx Consortium group in bedrock in the northeastern part of the province near Knee Lake and measure less than a millimeter in size. At this time, she is unable to say exactly how much was found, but possibly a “handful” of diamonds, and “maybe more”. For 16 years, prospectors and geologists have been actively seeking diamonds in the Manitoba region, as diamonds have been mined in its neighboring territories: northern Ontario, Saskatchewan and the Northwest Territories. Some major players have conducted exploratory mining in the region including Kennecott in 2001 and De Beers a few years later.

It is too soon to announce whether there is in fact a mine to discover. However, should further prospecting suggest there is mine potential, the next phase will require a significant investment of possibly millions of dollars for deeper exploration. “Through the work of Manitoba Geological Survey geologists and their industry partners, Lynx Consortium diamonds have been discovered in northeast Manitoba for the first time in the province’s history. This preliminary prospecting does not assure mining development, but rather confirms the potential for a certain mineral exists in the geological area,” Minister Cliff Cullen said in a news release.

Photo: The Geological Survey of Canada, modified by The Northern Miner