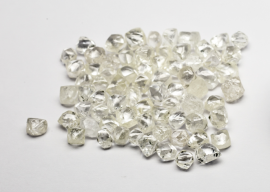 The month of March will again see a full schedule of rough diamond tenders and sales in Antwerp. In addition to sales and tenders from major players such as Rio Tinto, Petra Diamonds, Gem Diamonds and Dominion Diamonds, Antwerp tender houses Bonas Group, First Element and Koin International will feature goods from a diverse range of diamond producers from around the globe, from Brazil's Braúna Mine to the Gahcho Kué and Renard mines in Canada, to Firestone Diamonds' Liqhobong Mine in Lesotho and Diamcor's Krone Endora Mine in South Africa, among others.

Mountain Province Diamonds yesterday announced the completion of the second sale of Gahcho Kué diamonds in Antwerp (Bonas Group) at which the Company sold 277,646 carats. They received bids on all parcels offered, including unsold parcels carried over from the January sale, and sold all the parcels offered. Their third sale of approximately 193,900 carats of Gahcho Kué diamonds is scheduled for late March 2017. Mountain Province owns 49% of the project, De Beers holds 51%. They are contractually obliged to sell 10% of their production to local diamond manufacturers and traders.

Bonas Group will hold tenders from Lipari Mineração's Braúna Mine in Brazil, South America's first kimberlite diamond mine (March 8 -17); Mountain Province's goods from Gahcho Kué in Canada (March 20 - 29); Namakwa Diamonds Limited's rough production from its Kao Mine in Lesotho; and Stornoway Diamonds' goods from its Renard Mine in Canada.

First Element, a fully independent diamond services company and one of the premier diamond valuing, marketing, cleaning and tendering companies in the industry, will feature South African goods from the Jagersfontein & Rooipoort Developments at its tender from March 13 to 17, closing at 12:00 on Friday the 17th, with results being announced shortly afterwards. The tender will take place at the Antwerp Diamond Tender Facility at the AWDC building, Hoveniersstraat 22, 2018 Antwerp. From March 20 - 24 they will hold the second Firestone Diamonds tender from its Liqhobong Mine in Lesotho, and will also take place at the Antwerp Diamond Tender Facility.

Koin International will hold a rough diamond tender in Antwerp from 22 – 30 March. The tender includes exciting original rough productions from: Angola F2M (original Angola direct, Koin assortments (50.000cts+). New size ranges included from 4ct - melee! Excellent opportunity for manufacturers); Diamcor's, Krone Endora Mine in South Africa (original run of mine from Krone-Eudora mine, singles and melee parcels); the Klipspringer Mine in South Africa (original run of mine from the new course tailings); Democratic Republic of Congo goods (original production from the DRC. Run of mine, melee through to single stones); goods from Guinea (original productions from Massanta Kindia and Banakoro. Parcels and single stones); and a Fancy Colour Sale, with parcels and singles.