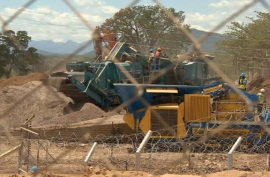 The Zimbabwe Consolidated Diamond Company (ZCDC) has fired its acting chief executive Ridge Nyashanu amid reports of a dramatic plunge in production and revenue, reports the Zimbabwe Independent. The ZCDC produced about 900,000 carats last year from peak figures of 12 million carats annually. The latest firing comes a few months after the ZCDC relieved its former CEO Mark Mabhudhu of his duties in unclear circumstances. Nyashanu was replaced by Morris Mpofu, who was the head of the exchange control unit at the Reserve Bank of Zimbabwe (RBZ). Nyashanu was controversially appointed after Mines Minister Walter Chidhakwa and his permanent secretary Francis Gudyanga were said to have appointed people without experience in the diamond mining sector.

Nysahanu’s firing comes at a time the ZCDC suffered a major blow last week after its concerted efforts to continue extracting diamond ore in Chiadzwa were halted by the High Court. The government-owned diamond company was barred from collecting diamond ore mined by Mbada Diamonds following an application filed by Mbada’s 50% shareholder Grandwell Holdings. Meanwhile, Zimbabwe’s mines minister Walter Chidhakwa told Rough & Polished last month that the actual consolidation of diamond mining was yet to be concluded because of the legal fights and the protracted time it had taken negotiating with the previous Marange miners. “It has taken much longer than we anticipated [reaching] an agreement on these matters but I am happy to say that we are now finalising the matters,” he said.

In related news, the Zimbabwe government, through the ZCDC, is expanding diamond exploration to other parts of Manicaland to include Mutasa and Mutambara districts, reports The Herald. The ZCDC has contracted an Environmental Impact Assessment for the two districts. Their current alluvial mining operations are in Chiadzwa.