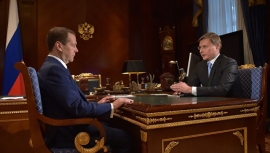 Following the resignation of Andrey Zharkov as president of ALROSA, Sergey Ivanov, ex-head of insurer SOGAZ, and senior vice-president of Russia's largest lender Sberbank, was yesterday, March 6, officially appointed as President of the company for a three-year term. His appointment was signed by Russian Prime Minister Dmitry Medvedev.  "The government directive on your appointment to the position of head of the sole executive body of ALROSA has been signed. I would like to inform you [of this] and wish you success in this challenging work," Medvedev said in the meeting with Ivanov, reports Russia News Today.