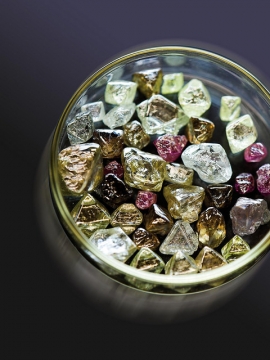 Rio Tinto has lowered by 66% its estimate of the mineral resources available at its Argyle diamond mine in Australia: the estimate now reflects solely the current mine plan, whereas the previous estimate included resources calculated with an extension of the mine taken into account. This extension is now under review. In a statement released last week, Rio Tinto writes, "During 2016, estimated Argyle Mineral Resources exclusive of ore reserves decreased by 29 million tons (Mt), from 44Mt to 15Mt" as a result of this recalculation.

As the change to Argyle Mineral Resources does not impact reported Ore Reserves, this reduction has no bearing on the current mine plan which sees production continuing until 2021.