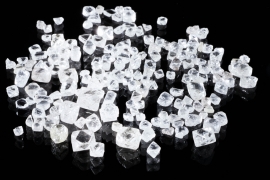 Peregrine Diamonds, a TSX-listed diamond exploration and development company with assets located in northern Canada and Botswana, has completed an internal concept study of a potential open-pit plus underground mining development at its 100% owned CH-6 kimberlite pipe at the Chidliak Diamond Project near Iqaluit, Nunavut, Canada. It concluded there is the potential to substantially enhance the economics of the Chidliak Project by incorporating an underground mining operation. "The results of this study are excellent and have significantly changed the specifics for the 2017 work program", the statement reads. "It clearly demonstrates the benefit of focusing the 2017 program on proving the resource potential at CH-6 below 260 metres, the current bottom of the Inferred Resource in the Preliminary Economic Assessment (PEA)." As a result of this conceptual study, a drill program targeting this deeper kimberlite is planned to commence in June 2017 to expand the resource to depths up to 500 metres below surface. The Company says it is in discussions with various parties regarding financing for the 2017 program and is confident such financing will be obtained.

The PEA highlights that the CP1D represents a robust, high margin, ten-year, open-pit mining project with very attractive economics, including after tax Net Present Value (NPV) of US$352 million (C$471m), Internal Rate of Return (IRR) of 29.8% and a two year payback. It foresees a life of mine average production rate of 1.2 million carats per year, peaking at 1.8 million carats per year. An Inferred Mineral Resource of 11.39 million carats in 4.64 million tons of kimberlite at an average grade of 2.45 carats per ton has been defined for a portion of the CH-6 kimberlite. The PEA concluded that the project was of sufficient merit to proceed to the Preliminary Feasibility Study (PFS) stage.

Peregrine will now move on to core drilling at CH-6 to better quantify the TFFE and possibly convert that material to a Mineral Resource, and will undertake bulk sampling of CH-6 to advance the resource to the Indicated level. An independent diamond valuation by WWW International Diamond Consultants of a 1,013 carat parcel of diamonds from CH-6 returned an average market price of US$213 per carat, and modeled prices that range from a minimum of US$162 per carat to a high of US$236 per carat, with a base model price of US$188 per carat (all using the February 24, 2014 price book). The announcement comes with the requisite caveat: "The Chidliak 2016 PEA is preliminary in nature and includes Inferred Mineral Resources that are considered too speculative geologically to have the economic considerations applied to them that would enable them to be categorized as Mineral Reserves. Mineral Resources that are not Mineral Reserves do not have demonstrated economic viability. There is no certainty that the PEA will be realized."