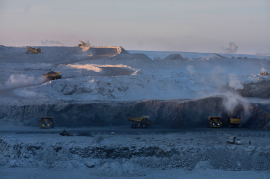 Gahcho Kué, the world’s largest new diamond mine in the last 13 years, officially began commercial production today (2 March 2017), De Beers announced in a press release. The mine, a joint venture with De Beers Group (51%) and Mountain Province Diamonds (49%), is expected to produce approximately 54 million carats of rough diamonds over its lifetime. Production ramp up began on 1 August 2016 and the official opening ceremony took place on 20 September 2016. Bruce Cleaver, CEO, De Beers Group, said: “Today marks a significant landmark for De Beers in Canada as Gahcho Kué becomes an important contributor to the Group’s global production. That the mine has reached this landmark, on budget and ahead of schedule, is testament to the partnerships that have worked together since construction began. It’s a result of these partnerships that the mine is set to deliver socio-economic benefits of more than C$5 billion to the economy of the Northwest Territories over its lifetime.”

Kim Truter, CEO, De Beers Canada, said: “With Gahcho Kué achieving commercial production, it successfully builds on the transformation of De Beers in Canada. General Manager Allan Rodel and his entire team are to be congratulated for completing this milestone safely and ahead of schedule during the extreme winter conditions that have taken place over the past few months.” Patrick Evans, President and CEO of Mountain Province Diamonds, added: “The dedicated support of our shareholders, business partners and employees has made today’s important achievement possible. Gahcho Kué is a rich diamond deposit that secures Canada’s position as one of the world’s leading diamond producers. Our thanks and appreciation goes to our operating partner, De Beers Canada, for delivering the Gahcho Kué mine safely and ahead of schedule.”

The fly-in/fly-out remote mine site is situated approximately 280km northeast of Yellowknife in the Northwest Territories (NWT) of Canada. Comprising three open pits, the mine will employ 530 people full-time, with the majority working a two-week in/two-week out rotation. In addition to a US$329 million (C$440 m) boost to the NWT economy through 2015, the Gahcho Kué mine will provide a further US$4 billion (C$5.3 b) in Gross Value Added (GVA) to the NWT now that it has reached commercial production, according to a socio-economic impact report by EY.