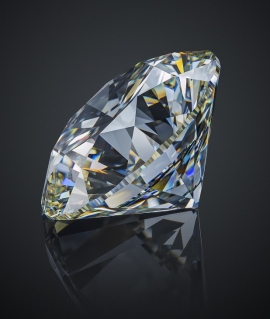 According to a press release, ALROSA, the world’s largest diamond producer by volume, reported the results of the international diamond auction, which took place in the Sixth International Diamond Week in Israel (IDWI), offering for sale special-size natural rough diamonds (10.8-ct+) , as well as polished goods. The company sold 105 lots of rough and polished diamonds worth $21.8 million during the trading session held on 13-16 February, 2017 in the City of Ramat Gan, Israel. The auction was attended by 119 buyers from 30 countries. ALROSA auctioned off diamonds from the "Towns of Yakutia" collection, produced by Diamonds ALROSA, the miner’s subsidiary.

The lots included the "Star of Vilyuysk", the largest round diamond ever manufactured by Diamonds ALROSA - and one of the largest in the world in this segment - the Star of Vilyuysk, weighing 80.59 carats. It is one of the ten diamonds produced from the 235-carat rough diamond "City of Vilyuysk", recovered at the Yubileynaya (Jubilee) Pipe in 2013. It took more than nine months of hard work for Diamonds ALROSA’s craftsmen to cut and polish the giant diamond. The collection also includes "The Glory of Yakutsk", a pair of +10-carat radiant fancy yellow diamonds (VS1) fashioned from a 33.06-ct rough diamond, also recovered from Yubileynaya. Diamonds ALROSA is a diamond cutting operation owned by the parent company and one of the biggest diamond manufacturers in Russia. Diamonds ALROSA sells diamonds of round and fancy cuts in the domestic and overseas markets offering goods of a complete product mix in terms of size, weight, color and quality.