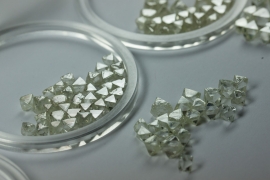 Russian diamond mining giant ALROSA today (Tuesday) announced that it prepaid a $600 million bank loans received from VTB Bank in 2012 and extended in 2014 until October 2018. ALROSA paid back the bank loan with its own cash funds, thus reducing its debt on loans and borrowings to $1.7 billion, while its average interest rate decreased from 6.6% to 6.3%. ALROSA has made it a priority in recent years to cut down its outstanding loans.

ALROSA believes that the established long-term partnership with the companies of VTB Group will continue going forward. "As part of the conservative liquidity management policy, ALROSA prepaid long-term bank loans in the total amount of $600 million, which allowed us to reduce the average cost of debt and ensure a comfortable debt repayment schedule", said Igor Kulichik, CFO and Vice President of ALROSA.