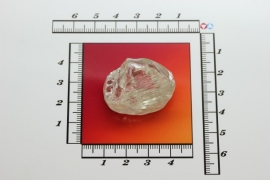 ALROSA recovered a large diamond of 121.88 carats from Jubilee kimberlite pipe in the Republic of Sakha (Yakutia), according to a press release (translated by Rough-Polished). The diamond was extracted by the company’s business unit Aikhal Mining and Processing Division (MPD) at the processing plant No.14. The diamond crystal has a yellowish tint, its dimensions are 28 х 18 х 19.5 mm. The Jubilee pipe is famous for its large finds, has been developed as an open pit since 1989 and accounts for the bulk of ore that Aikhal plant processes. In accordance with JORC, Jubilee reserves are estimated at 97 million carats of rough diamonds. Based on this assessment, mining at the pipe can be provided until 2030. Aikhal Mining and Processing Plant is a producer of diamonds from the Jubilee, Komsomolsky and Aikhal deposits. In 2016, the Aikhal plant produced 12.2 million carats of diamonds, making it ALROSA's largest division with 32% of all Russian production.