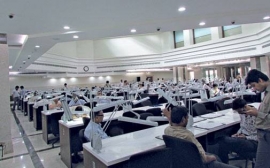 As we noted two weeks ago, word from De Beers and ALROSA was that the sharp decline in low-quality, low-value stones destined for India has abated as the country's cash situation stabilizes post-demonitization, and India's official January trade figures bear this out. The Gem & Jewellery Export Promotion Council (GJEPC) reports that the volume of rough diamond imports during the month increased 41% over December 2016 and a full 79% since November 2016 when demonitization was introduced. Meanwhile, the value of rough diamond imports still fell 9% from December to $1.27 billion from $1.39 billion despite the massive volume increase. It is therefore clear that January saw large volumes of low-value goods pouring into India in January - and these are precisely the type of goods that were hit by the cash crisis.

Exports of cut and polished diamonds from India stood at US$1.62 billion in January 2017, a 9.5% increase from the $1.48 billion in December 2016 and a 2.9% rise as compared to the US$1.57 billion in the same month a year earlier. Exports of cut and polished diamonds for the April 2016-January 2017 period were up 12.09% to US$18.50 billion as compared to US$16.51 billion a year earlier. Overall exports from the gem and jewelry industry during January 2017 stood at US$2.97 billion, nearly the same figure as in December 2016 and representing a marginal decline of 1% over the US$ 3 billion exported in the same month the previous year.