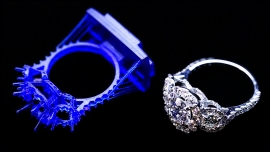 In 2013, Kristall Smolensk diamonds, a Russia-based major polished diamond manufacturer, unveiled a replica of the Great Imperial Crown (it was on display at the Antwerp Diamond Trade Fair in January). The specifications of the replica were slightly different from the original, encrusted with 11,426 cut and polished diamonds, weighing 1,180 carats and with an estimated worth of $15 - 20 million. The creation of the replica took only two months of painstaking work by more than 60 Smolensk master-jewelers, using EnvisionTEC’s Perfactory 3D Printer technology. “Without the Perfactory 3D Printers, it would have taken more than a year to produce the replica crown and a lot more staff,” says Mr. Kunzev, CEO of Smolensk Diamonds Jewelry Group. “The accuracy we can achieve on an object this size is incredible and beyond skilled craftsmen using traditional methods.”

Other jewelry companies have also seen the appeal of technical innovation so consumers feel engaged to the purchasing process. “Traditionally, that’s not easy because it takes a long time to create a design. But will 3-D printing change that in the future? I don’t see why not,” says Bruce Cleaver, CEO of De Beers. Graff is one of the few brands that is open about their use of 3D technology, using it as a tool to aid, not replace its craftsmen. “If you don’t move forward with technology, you’ll eventually be left behind,” said Mr. Graff.

Online diamond jeweler Baunat partnered with a 3D printing startup Twikit, giving customers the opportunity to buy customized diamond jewels. Customers can add their name on the Twikit tool which automatically generates a sample of their name in diamonds, as well as the updated price in real time. The necklace consists of small G VS2 certified diamonds, and the customer can choose their preferred metal - 18 karat white, rose or yellow gold. Once the order is confirmed, the file is sent to a 3D printer, the mold is then 3D printed and lost-wax casted. Subsequently the setting is polished and the diamonds are added. The pieces are handmade in Antwerp but use cutting edge technology for the finishing touches. Baunat is able to keep their prices competitive as they have direct access to the Antwerp diamond market, which is also important in terms of traceability, something the current generation values immensely.