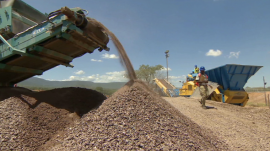 The decision to consolidate diamond mining killed the industry in Zimbabwe and government is currently re-engaging the Chinese companies that were operating in Marange to reach an amicable settlement, said Finance Minister, Patrick Chinamasa while addressing Confederation of Zimbabwe Industries (CZI). New Zimbabwe writes that according to the minister, the diamond mining sector is "dead" and is currently not contributing meaningfully towards the country's foreign currency earnings. "As of now the diamond sector is dead. I used to visit Mutare during the hype of diamond mining and one could feel the diamond money. We need to come back to that situation again," said Chinamasa.

The minister said he was working hard with mines minister Walter Chidhakwa to turn around the fortunes of the diamond industry. "The issue that got the sector to collapse is essentially that we felt this sector was not contributing and we decided to consolidate it. In other countries like Botswana, Namibia and Angola the State is the dominant player in the mining of diamond," said Chinamasa. He added: "Now, arising from the decision we took there was a lot of litigation. Minister Chidhakwa and I we are trying to engage the Chinese companies that were operating there so that we reach an amicable settlement and move on. The discussions to that effect have started," said Chinamasa. The minister also said that since he became finance minister in 2013, diamond production has never met its projections. "Since I became the finance minister, in 2014 budget, I projected 14 million carats but I never got anything more than 3 million," said Chinamasa.

The minister wants people to understand that Zimbabwe's alluvial diamonds are much less valuable than in neighboring countries where they mine Kimberlite deposits: 10% are gem quality fetching $80 per carat on market, 25% are near-gem ($15-50 per carat) and 75% ar industrial diamonds with a value of $6-10 per carat. "We are not like Botswana or Angola with 96 percent gem quality. If we go into Kimberlite mining may be we may have greater percentage of near-gem or gem," said the minister. In 2015, government kicked out companies that were mining diamonds in Chiadzwa as it pushed for consolidation, but some firms rejected the move and sued the state. At the time, there were claims that large sums of money were lost through corruption with Mugabe telling the nation that as much as $15 billion was unaccounted for.