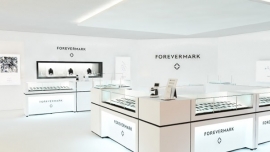 Forevermark, the diamond brand from the De Beers Group of Companies, has expanded to 2,000 retail outlets globally with the intention of expanding by an additional 10% this year, said CEO Stephen Lussier. The opening of the 2,000th Forevermark outlet, the Zen Diamond Anatolium store in the city of Bursa in Turkey, was followed by an announcement of a strong 2016. The brand spent US$85 million on consumer-facing marketing activities in 2016 to help stimulate global demand for diamond jewelry. 2016 saw a 14% increase in the number of retail outlets as well as a 21% y-on-y increase in the number of inscriptions. The brand, which launched in 2008, also expanded to three new markets - Hungary, South Korea and Thailand – making the Forevermark brand available in 25 markets worldwide.

"We'll keep growing, but we want to be a little bit careful. It's about quality, not quantity," Lussier told Reuters, adding that the projected growth in the number of outlets would be around 10 percent for 2017. Lussier continued by mentioning the Forevermark retail outlets accounted for global revenues of approximately $1billion in 2016, a figure which had roughly doubled since 2013. In addition to the brands own marketing activities, De Beers is also a member of the Diamond Producers Association (DPA), an international alliance of the world’s leading diamond mining companies who promote generic marketing diamonds and the industry as a whole.