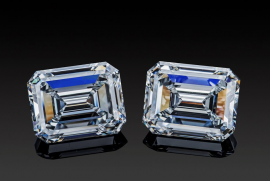 Russian mining giant ALROSA is stepping up its marketing game beyond its contributions to the Diamond Producers Association (DPA), we were told this past Wednesday at ALROSA Night - a joint initiative between the Antwerp World Diamond Centre (AWDC) and ALROSA at the Belgian Ambassador's Residence in Moscow. The company's first move to promote ALROSA as a brand name was announced last December: the miner has renamed its foreign trading subsidiaries and affiliates, previously called ARCOS, as part of an initiative to create ALROSA’s single corporate brand. The sales network offices now bear the name of ALROSA and their region of location, such as ALROSA Belgium. They will also carry out relevant rebranding. This decision was made to identify ALROSA with its own sales network and provide clients with the guarantee of origin and quality of rough and polished diamonds sold through the network.

Galina V. Platonova, Advisor to ALROSA President Andrey Zharkov, told us that the company is well aware that today's marketing challenges call for more attention to be paid to marketing programs, including developing the ALROSA Alliance and the use of its logo identifying a customer as a priority buyer of gem quality rough diamonds and a responsible business partner, as well as tracing programs to provide authentication of the life cycle of their diamonds, from mine to market. Asked whether ALROSA is intending to partner with big market players or move toward vertical integration with its own retail brand, Platinova said it was too early to say, but she confirmed that they were currently not planning to move further downstream. Rather, a key element of their brand story is their new initiative to auction special (+10.8 carat) diamonds directly to consumers. DIAMONDS ALROSA, an in-house cutting and polishing unit focusing on producing polished diamonds of the Russian cut, is another way they are marketing Russian stones.

The overall thrust, however, is need to focus on promoting natural diamonds and assuring traceability, as well as countering criticisms of synthetic diamond producers. "We are a responsible producer with billions of dollars invested in the regions where we mine. We spend substantial amounts to care for ecology," Platonova said. Concerning synthetic diamonds specifically, she said, "Traceability and detection would help to separate the two markets. It is not our goal to start a fight with the synthetic trade. We just want the business to be open and the origin to be officially diclosed and crystal clear for the customers. Then it is the customers' choice what to buy." ALROSA has indeed come a long way in the last several years, becoming more transparent about disclosing its resource base, building its ‎client list and developing its marketing strategy.

At the ALROSA Night gala in Moscow, AWDC and ALROSA reaffirmed their partnership and commitment to a stable future for the diamond industry. AWDC President Stéphane Fischler said, "Antwerp and ALROSA formalized their partnership and mutual interest in a cooperation agreement signed in 2014, but this has become much more than just a formal agreement. We have nurtured this partnership and have seen it grow: rough diamonds from Russia now represent 31% of all rough diamonds imported to Antwerp. To put that in hard figures: In 2016, the AWDC’s Diamond Office registered imports of nearly 28 million carats of rough diamonds from Russia, representing a total value of 2.5 billion dollars. This represents a 33% increase in volume and a 25% increase in value over the year before – and ALROSA is planning to increase production in the year to come. The worst of the diamond crisis might be behind us, but the world is no less challenging. Leadership, as well as trust, is as important as ever."