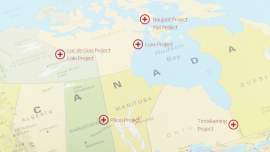 On January 17, 2017, North Arrow Minerals - a Canadian based exploration company focused on the identification and evaluation of diamond exploration opportunities in Canada - announced it had entered a property purchase agreement with Stornoway Diamond Corporation under which North Arrow will acquire Stornoway’s remaining interests in the Qilalugaq (Nunavut) and Pikoo (Saskatchewan) Diamond Projects. This transaction has now been completed, meaning that North Arrow holds 100% interests in both projects. Upon closing the property purchase agreement, Stornoway has transferred its approximate 18% interest in the Qilalugaq Project and approximate 15% interest in the Pikoo Project to North Arrow, and North Arrow has issued to Stornoway 2,000,000 common shares of North Arrow.

Stornoway retains 0.5% and 1.0% gross overriding royalties on diamonds and 0.5% and 1.0% net smelter returns royalties on base and precious metals mined from the Qilalugaq and Pikoo Projects, respectively. North Arrow is also required to make C$2.5M (US$1.9M) and C$1.25M (US$0.96M) cash payments to Stornoway at the same time that first royalty payments relating to the Qilalugaq and Pikoo Projects, respectively, are payable.

In their January announcement, Ken Armstrong, President and CEO of North Arrow, stated, "The Qilalugaq Project, Nunavut, hosts the large Q1-4 kimberlite which contains a population of fancy orangey yellow diamonds that are unique in Canada. A diamond drill has been mobilized to the community of Naujaat, just 9 km from Q1-4, where a drilling and sampling program is planned for this spring and summer. Further, the Pikoo Project remains Canada’s most recently discovered new diamond field with kimberlite intersected in 70% of the drill holes completed to date. We continue to define priority drilling targets at Pikoo both near existing discoveries and at the heads of unsourced kimberlite indicator mineral trains.”