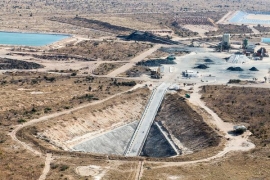 Gem Diamonds - a leading global diamond producer that owns 70% of the Letšeng mine in Lesotho, known for its high-value diamonds, and 100% of the Ghaghoo mine in Botswana, which produces diamonds at the lower-end of the price scale - has decided that its Ghaghoo mine will be placed on "care and maintenance" with immediate effect. That is to say, it is shutting down operations until profitability is more feasible. Their press release reads, "As previously announced, the development of the mine at Ghaghoo has progressed well and has now reached the point where it will shortly be in a position to commence full commercial production. However, the material fall in the prices of its diamonds from US$ 210 per carat in early 2015 to US$142 per carat at its most recent sale in December 2016, emphasises the weak state of the diamond market for this category of diamonds. With the Company's focus on profitable production, the decision has been made to place the asset on care and maintenance, and to continue to monitor market conditions for a time when commencing full production would make economic sense."

The company's latest financial update stated that the company achieved "weak prices" from its more traditional mine in Botswana, Ghaghoo, and "the future of the operation remains under review, as previously announced." During Q4, 16,989 carats were sold on open tender for a total value of $2.4 million, achieving an average price of $142 per carat. In Q4 2016, Gem did record a 60% increase in carats recovered (12,380) compared previous quarter (7,720 carats in Q3 2016) with a positive presence of larger diamonds than typically recovered. For the year 2016, however, carats recovered dropped 55% to 40,976 from 91,499. The company summarized the current situation at Ghagoo as follows: Planned operational improvements progressed well. Mill modifications yielded positive results with increased and improved diamond liberation. These modifications however are not sufficient to sustain the operation given current weak prices achieved for the Ghaghoo diamonds. It is anticipated that, after once-off settlement costs, this will result in an annualised care and maintenance cost of US$3 million.

Rough diamond producers have been saying for months now that India's demonetization has led to a price decline in smaller, lower value diamonds, precisely the type of stones mined at Ghaghoo. However, the Ghaghoo mine - the name of which derives from its extremely remote location within the Central Kalahari Game Reserve - has never performed up to expectations.