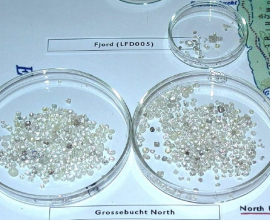 Namibia's Anti-Corruption Commission (ACC) has dropped an investigation into whether a new government independent sales company called Namib Desert Diamonds (Namdia) deliberately sold Namibian diamonds cheaply to Dubai-based firms, writes The Namibian, which first broke the story back in November 2016. The Namibian previously raised concerns that Namdia, tasked to sell stones worth over US$150 million (N$2.1 billion) per year as stipulated by a 10-year agreement between De Beers and the Namibian government, is allegedly operating without the desired level of transparency when it comes to selling Namibian resources. At the time, they wrote, "New state owned company Namdia has deliberately sold the country's diamonds cheaply to Dubai – five times less than the price they eventually fetched in the Middle East. People familiar with the industry told The Namibian this week that Namdia sold the diamonds here for US$500 (around N$7,100) a carat. But the same diamonds were then sold on for US$2,500 (N$35,600), per carat."

The ACC followed up by questioning energy ministry Obeth Kandjoze on whether national resources were deliberately underpriced abroad for the benefit of a few. ACC director general Paulus Noa confirmed to the newspaper that he had requested Kandjoze answer allegations that Namdia had sold Namibian diamonds cheaply. “I requested him (Kandjoze) to provide clarity (on Namdia). The minister gave me all the answers I wanted. I am satisfied with the answers,” he said. According to Noa, that was the end of it. Kandjoze's answers convinced him not to continue asking for more information. Although Noa insisted that the ACC was not investigating Namdia, people with links to the ACC said the investigation into the new diamond company was still ongoing.

The Namibian has in the past reported how Namdia appeared to be under the control of a group of top politicians, senior state officials and their associates, with links to top officials in the Presidency and to attorney general Sacky Shanghala. The newspaper says the ACC is quick to dismiss any corruption charges against top officials, and that this has, "frustrated his own top investigators, who have accused Noa of protecting the elite, such as ministers, military generals and their associates, from facing justice." The Namibian also references diamond experts that said Dubai provided two advantages to people looking to do dodgy deals: "firstly, it is the 'mixed origin' Kimberley Process certification that effectively deletes the origin of the diamonds; secondly, it is the frequent re-invoicing of diamonds, which are exported from African countries, at a lower price, before being re-exported from Dubai at a higher price." Namdia has contracted Dubai and London-based diamond dealer Neil Haddock, who has also worked for De Beers and its Namibian subsidiaries. Using Haddock as a consultant has raised suspicions of conflict of interest, and whether Namdia can really claim to be testing the market outside De Beers' pricing system.