Chairman of Anglo American To Step Down in 2017 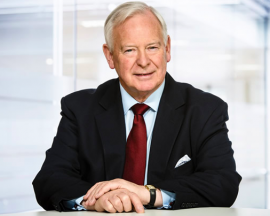 Anglo American, the London-based diversified mining conglomerate including the De Beers Group in its portfolio, has announced that Sir John Parker intends to step down, after serving eight years as Chairman, during the course of 2017. Sir John Parker, Chairman of Anglo American, said: "Having seen Anglo American emerge in a strong position from the mining industry downturn, with its sharp falls in commodity prices between 2014 and 2016, I believe that the time is now right for the Board to seek my successor during the course of 2017. The company, with its much restored balance sheet and a world class Board and management team, led by our Chief Executive Mark Cutifani, is well placed for the future.

"Chairing Anglo American has been an enormous privilege and it has also appealed to my close interest in engineering, technology and corporate turnarounds. The ability of companies to adapt, innovate and think creatively about the role they can play in society is a key ingredient of long term competitive advantage. These are qualities at the heart of Anglo American's DNA." Sir Philip Hampton, Anglo American's Senior Independent Director, will now lead a process to identify candidates with appropriate global listed company boardroom experience. Sir John Parker will continue to chair the Board until such appointment is effective.