De Grisogono Partners with US Jeweler in Expansion Effort 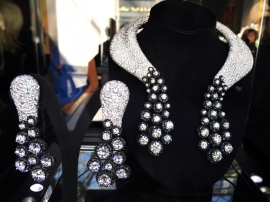 De Grisogono, a Geneva-based high-end jeweler, has entered a partnership with Jewelers DLK for its American operations in an effort to further develop the brand’s presence in the U.S. The partnership with DLK, owned by David and Lisa Klein, will enable the brand to further develop their precious stones, haute-jewelry collections and move away from being a brand that is reputed solely for having bought some of the world’s largest rough diamonds. De Grisogono USA will be managed by the Kleins, the Geneva-based company said on Friday.

“After developing the brand in the U.S. for more than 15 years, the partnership with David and Lisa Klein will enable us to join forces with a key player in the jewelry business,” said John Leitao, CEO of De Grisogono. “This is a great opportunity for De Grisogono to further enhance its unique positioning and unlock its full potential in the U.S.” Last year de Grisogono announced the acquisition The Constellation, the 813-carat rough diamond, discovered by Lucara Diamond, at its Karowe mine in Botswana in November 2015. Earlier last year, the jeweler had acquired the rights to market a 404-carat stone extracted by Lucapa Diamond from the Lulo project in Angola.

De Grisogono will continue to operate its boutique store on Madison Avenue, in New York, and announced its intention to open a new location in the city in the fall of this year, the company added. Prior to the partnership, the Kleins ran jeweler Leviev’s U.S. business. The pair ended that relationship before inking the new de Grisogono agreement.