Uncertain Future for Argyle Diamond Mine 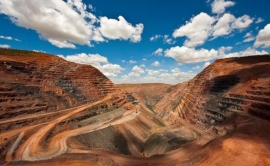 Last year Rio Tinto’s diamond revenue slid 12%, leading them to review their plans to extend the life of the Argyle diamond mine, considering the global demand for rough had otherwise strengthened, writes The West Australian. Rio Tinto spent $US2.5 billion expanding the Argyle mine below ground with an expected lifespan reaching 2021. Should they decide not to continue with the planned underground extension, the mine’s closure could come considerably sooner. They are yet to announce whether they will continue with the second stage of the underground block cave at the East Kimberley mine. Rio boss Jean-Sebastien Jacques confirmed the mine’s future was under review: “It’s a pretty challenging market environment. Diamond prices are not great, except for the nice pink ones, so it’s a pretty challenging situation,” he said. “I can’t make any comment on any extension of the block cave at this point in time because everything is under review.”

Although rough diamond production grew 4% to 18 million carats last year at both the Argyle and Diavik mines, sales dropped to $613 million, the company reported in their 2016 annual results. Earnings before interest, tax, depreciation and amortization (EBITDA) fell 18% to $239 million, while net income plummeted 41% to $47 million. This decline seems to be at odds with the results published by comparable miners. Rough diamond revenue from De Beers rose by 36% in 2016, whilst ALROSA reported sales advanced by 26%. Rio Tinto notes that the higher production at Argyle was achieved by higher ore throughput partially offset by lower recovered grade; the same combination prevailed at Diavik.

Rio Tinto owns the Argyle mine in Australia, known for its production of rare fancy pink diamonds as well as a high volume of lower-quality rough. They own 40% of the Diavik mine in Canada in a partnership with Dominion Diamond Corporation. According to the miner, “overall demand for rough diamonds recovered in 2016 from a cyclical downturn in the previous year, varying significantly across product segments.” The company forecasts production will rise to between 19 million and 24 million carats in 2017.