Trump Quick to Interfere in U.S. Retail Sector in Defense of Daughter 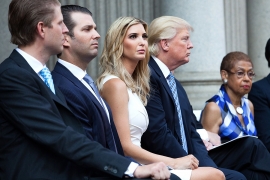 Speculation was already rampant about the potentially positive impact of having a First Lady and Daughter with their own retail brands; that impact has arrived in the first month, but whether or not it is positive is another question. The first family made headlines early this week with First Lady Melania Trump filing a $150 million lawsuit against the Daily Mail for a defamatory article that cost her “major business opportunities.” Now President Trump is making headlines by criticizing Nordstrom after they discontinued daughter Ivanka Trump’s accessories and clothing line, causing the myriad voices worried about a conflict of interests to grow louder. Jordan Libowitz, communications director for Citizens for Responsibility and Ethics in Washington, a nonpartisan watchdog group, says, “We have never seen before a president using the power of the presidency to pressure businesses for the obvious benefit of his family.”

Nordstrom announced they would stop selling Ivanka Trump’s brand since sales have “steadily declined”. To that Trump posted “My daughter Ivanka has been treated so unfairly,” on his personal Twitter account. “She is a great person -- always pushing me to do the right thing! Terrible!” The post was later retweeted through his official Presidential account, @POTUS. According to Sean Spicer, the White House spokesman, the tweet was not about business, rather “an attack on his daughter.” He continued, “For someone to take out their concerns with his policy on a family member of his is not acceptable, and the president has every right as a father to stand up for them.”

This is not the first time Ivanka’s name and brand have been criticized. Shortly after Trump was elected, Ivanka's accessories company, Ivanka Trump Fine Jewelry, came under heavy criticism for aggressively marketing a $10,000 bracelet that she wore on the "60 Minutes" interview about her and her father's White House plans. Since then Ivanka handed the day-to-day reigns of her brand to lieutenant Abigail Klem, while she works for the Trump Organization and husband Jared Kushner serves as a presidential adviser.

T.J. Maxx, Marshalls and Neiman Marcus are just some of the other retailers who have decided to limit the exposure of Ms. Trump’s brand. Macy’s Inc. parted ways with Donald Trump, which previously sold his brand of menswear, following his criticisms regarding Mexican immigrants at the outset of his presidential campaign in 2015. Trump called Macy’s a “very disloyal company” and urged a boycott. Meanwhile there is an online campaign boycotting all Trump products, #GrabYourWallet.