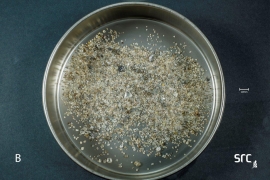 It is anticipated that diamonds weighing more than 1,000 carats will be recovered from the bulk samples and the diamond parcel will be used for revenue modeling of the Faraday 2 and 3 kimberlites. Diamonds recovered from the Faraday 1 mini-bulk sample will be used to correlate diamond grade and quality potential with the nearby Faraday 3 kimberlite. The bulk sampling program is expected to be completed in early Q2 of 2017. Kennady Diamonds President and CEO, Dr. Rory Moore stated: “We are delighted with the very productive early start to the 2017 winter program, which was facilitated by having stored an RC drill rig on site after completion of the 2016 program. Moreover, we have decided to mobilize a second RC rig up the winter road this week in order to take further advantage of optimal drilling conditions.”