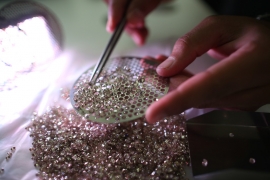 Rio Tinto has announced it will relinquish its interest in the Bunder diamond project in India "due to commercial considerations" and will gift it to the Government of Madhya Pradesh. The move is not entirely unexpected, as Rio Tinto announced back in August 2016 it would not proceed with the development of Bunder and would be seeking to close all project infrastructure. Under a Government of Madhya Pradesh order signed in January 2017, the Government will accept ownership and take on responsibility for the Bunder assets. The project, concerning a deposit estimated to have diamond reserves of 34.2 million carats, was frought from the start, facing a series of environmental issues. Wildlife groups said the country’s first private diamond mining project would severely damage the wildlife corridor between the Panna Tiger Reserve and the Navardehi Wildlife Sanctuary. The environment ministry claimed that surface extraction “would entail greater extent of forest land use leading to permanent loss of the high quality forest areas” and “the project proponent may also explore the possibility of underground (mining)”.

It was at that point, after having spent a reported $500 million in developing the project, that Rio Tinto Exploration India Private Limited announced, “As part of its ongoing efforts to drive shareholder value by conserving cash and cutting costs further, Rio Tinto has decided to not proceed with development of its Bunder project in India. Accordingly, we will be seeking to close all project infrastructure by the end of year 2016.” The inventory of assets and associated infrastructure handed over to the Government comprises all land, plant, equipment and vehicles at the Bunder project site. The inventory will also include diamond samples recovered during exploration. This approach will assist the Government to package the assets if it were to proceed with an auction process for the Bunder mineral rights.

Rio Tinto Copper & Diamonds chief executive Arnaud Soirat said “Our exit from Bunder is the latest example of Rio Tinto streamlining its asset portfolio. It simplifies our business, allowing us to focus on our world-class assets. We believe in the value and quality of the Bunder project and support its future development, and the best way to achieve that is to hand over the assets to the Government of Madhya Pradesh." He added, "Rio Tinto has long and enduring ties with India and we continue to see the nation as an important market for our metals and minerals and as a key hub for Rio Tinto’s business services.” Rio Tinto further states that it remains committed to its Diamonds business and the Indian diamond industry through its world-class underground mines, the Argyle diamond mine in Australia and the Diavik diamond mine in Canada. Rio Tinto continues to enjoy a strong partnership with the Indian diamond industry, with more than 250,000 diamond cutters and polishers employed in processing Rio Tinto diamonds.