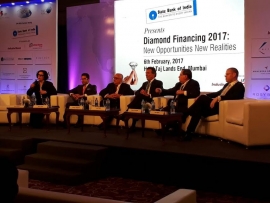 The Gem & Jewellery Export Promotion Council (GJEPC) organized an alternative financing seminar this week - Diamond Financing 2017: New Opportunities New Realities - at the WFDB Presidents’ meeting 2017, which was held in Mumbai. Many important members of the industry were in attendance, including Sudhir Mungantiwar, Maharashtra’s Minister of Finance. At the inaugural session, many expressed their concern about the lack of bank financing, such as Anoop Mehta, President of the Bharat Diamond Bourse. President of the World Federation of Diamond Bourses Ernest Blom called finance the “oxygen” of any business and said the industry lacked adequate financing, as several banks financing the industry, such as the Antwerp Diamond Bank and Standard Chartered, had either withdrawn or reduced exposure to the industry. He stressed that the vast majority of diamantaires were honest and law abiding and worked within the framework of all regulations.

Varda Shine, former CEO of De Beers’ Diamond Trading Company, chaired one of the two main sessions. According to Shine, banks “have lost their appetite” for financing the diamond industry as a result of low transparency, a lack of real solid collateral and the fact that banks see it as a no-growth industry. She concluded that every company needs to be transparent, compliant, and able to talk the same language as the financial institutions in order to benefit from the financing opportunities available, since certain companies are still being financed.

Chairman of the GJEPC Praveenshankar Pandya also stressed that there is a need for financial institutions to understand the industry, and to build proper structures accordingly. Many other bankers and industry experts shared their views and opinions during the seminar, and encouraged dialogue between the trade and the banks. According to GJEPC, one dissenting view was that of Erik Jens, CEO of Diamond and Jewellery Clients at ABN Amro, who said past mistakes are responsible for the current situation, and repeatedly stressed that it is an incorrect perception that finance is a problem. He said there is plenty of finance for bankable companies.  He also pointed out that profitability rather than turnover is the most important issue.