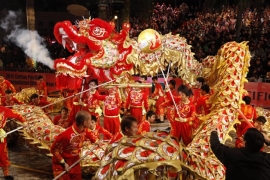 The year of the Rooster has officially commenced, and with that, the sales results of the Chinese New Year holiday period have been released. Chow Tai Fook reported mainland China outperformed Hong Kong and Macau’s holiday sales. During this period, between January 14 and February 3, revenue from the mainland rose by 4%, while same store sales grew by 1%. Gem-set sales on the mainland dropped by a whopping 20%, which is likely due to the brand not including the Valentine’s Day sales period this year.

This year, the brand launched two promotional campaigns, as well as curating a special collection of jewelry, for Valentine’s Day, “reminding couples of their romance with promises and tokens of love.” Hong Kong and Macau’s total sales fell by 11%, while same store sales were down 7%. Gem-set sales plummeted by 37%. According to the company, this was due to “the decline in the average selling price due to some big-ticket sales transactions in the corresponding period last year.”

The holiday results mirror those from the third quarter, October to December 2016, where mainland China recorded 7% growth, while Hong Kong and Macau fell by 6%.