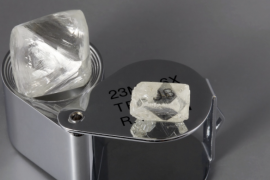 ALROSA, the Russian diamond mining giant, reports January sales of rough diamonds at $358.2 million and polished at $7.8 million; overall sales of $365.4 million represent a 107% increase over December 2016 and a 60% increase over the same period last year. The miner said it was "cautiously optimistic" that the trade in lower quality, low-cost goods - the majority of which are destined for India - is stabilizing. India's demonitization went into effect in early November 2016 as the government removed the existing INR 500 and INR 1,000 notes from circulation, and this had an immediate impact on the rough diamond trade - particularly for small and mid-sized manufacturers. ALROSA's rough sales tumbled from $430.8 million in October 2016 to $245.6 million in November and $173 million in December. The 107% jump in rough sales is therefore a strong indication that the worst of the Indian cash crunch is over.

“The first month of the year has expectedly demonstrated effective demand for rough diamonds in almost all market segments," says Yury Okoemov, ALROSA Vice President. "The diamond cutting sector in India obviously copes with the problems caused by the currency reform in this country somewhat faster than expected. We still remain cautiously optimistic about the activity in the small-size, low-cost rough diamond segment.”