Gacho Kué Diamond Mine Shows Its Potential with 68-Ct Stone 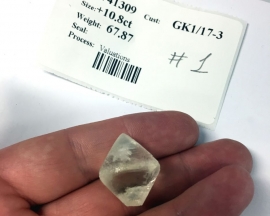 Mr. Evans added: “Following some disruptions due to conveyor systems winterization issues, the production ramp-up at Gahcho Kué is once again progressing well and the mine is on track to achieve commercial production on schedule during the current quarter.” Mountain Province also announced that the Company’s second sale of diamonds from ramp-up production will take place in Antwerp, Belgium, from February 20 to March 1, 2017.