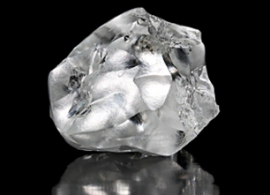 Gem Diamonds, which owns 70% of the Letšeng mine in Lesotho - famous for the production of large, high quality, exceptional white diamonds - and 100% of the Ghaghoo mine in Botswana, saw fourth quarter 2016 sales from its Letšeng mine fall 6% since Q3 and 22% for the year as a result of fewer exceptional large diamonds being recovered than expected. The total amount of carats recovered at Letšeng increased 8% to 26,438 carats during Q4 vs. Q3, when it recovered 24,388 carats, and overall recoveries for the year remained approximately the same, at 108,206 carats. The number of carats sold during the year rose 6% to 108,945 carats, so the 22% fall in revenues is attributable solely to the price per carat, which fell 26% to $1,695/ct from $2,299/ct in 2015.

The company achieved "weak prices" from its more traditional mine in Botswana, Ghagoo, and "the future of the operation remains under review, as previously announced." During the Period, 16,989 carats were sold on open tender for a total value of $2.4 million, achieving an average price of $142 per carat. Gem did record a 60% increase in carats recovered (12,380) compared previous quarter (7,720 carats in Q3 2016) with a positive presence of larger diamonds than typically recovered. For the year, however, carats recovered dropped 55% to 40,976 from 91,499. The company summarized the current situation at Ghagoo as follows: Planned operational improvements progressed well. Mill modifications yielded positive results with increased and improved diamond liberation. These modifications however are not sufficient to sustain the operation given current weak prices achieved for the Ghaghoo diamonds.

Gem Diamonds' CEO, Clifford Elphick commented: "The market for large special diamonds for which Letšeng is renowned has remained firm to date, but the relative paucity of these diamonds recovered during 2016 has had an adverse impact upon the Company's revenues and cash flows during the year. Operationally, all other production metrics were achieved and within guidance issued. At Ghaghoo, the fall in prices of its diamonds from US$ 210 per carat in early 2015 to US$ 142 per carat at its most recent sale in December 2016, emphasises the weak state of the diamond market for this category of diamonds. With the Company's focus on profitable production, and as indicated previously, the future of the operation remains under review with a decision scheduled to be made during Q1 2017 with regards to its current financial viability."

Concerning the state of the diamond markt, the company writes: The overall mood of the diamond market continues to remain cautious. Demand for, and prices of, Letšeng's large high quality white diamonds have remained firm throughout the Period.  The smaller commercial goods mined at Ghaghoo remain under pressure. The recent Indian demonetisation and high levels of polished inventory available, and because the supply of this category of diamonds will increase significantly from production of some 7 million carats per annum from 2017 from the new Liqhobong, Renard and Gahcho Kué mines, the Company believes prices for this category may remain constrained.