Jewelers Board of Trade: 50% Rise in U.S. Jewelry Business Closures in 2016 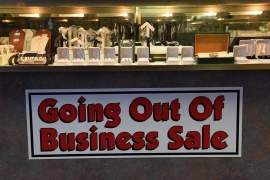 "Despite appearances, this was not the worst year ever for business closures," according to JBT president Anthony Capuano. in 2009, more than 2,000 businesses closed their doors, and that year witnessed many more bankruptcies than this past year, where the majority of closures were due to retirement. Capuano: “I don’t think we are seeing anywhere near recessionary conditions. These businesses are not leaving unpaid obligations. It’s mostly businesses without succession plans, or the owners’ kids don’t want to come in the business.” Capuano added, “I see no reason to believe the number of jewelers will not continue to decrease. I would hope that if we have better years, maybe the rate of decrease will abate a bit. But I think the trend will continue ... I always point to the opportunity,” he says. “If there were five businesses in town, there is presumably more business for the four that are left. Because jewelry is such a personal purchase, it will always favor the existence of brick-and-mortar.”