The Curious Case of the Inexistent US Kimberley Process Authority 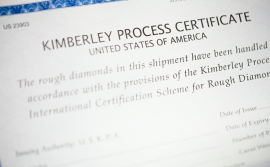 "No, this is not a joke - I wish it were." So begins Chaim Even-Zohar's latest Diamond Intelligence Briefing, which uncovers a bizarre oversight involving the U.S. Kimberley Process Authority (USKPA): it does not officially exist at all. Rather, USKPA's Director and General Counsel Cecelia Gardner told Zohar the organization has been operating under a DBA ("doing business as") name, while the full name is "U.S. Kimberley Process Authority Institute" (USKPAI) ... but this as well has ceased to exist. "The USCPI no longer exists as a legal entity in good standing." Consequently, Zohar's investigation reveals that the USKPA has been operating as a non-legal entity ever since the Delaware Secretary of State voided the organization about 12 years ago, without anyone noticing. "The very organization that prints KP certificates and provides them to licensees ... has failed to notice that its very own organization did not meet Delaware's legal compliance rules...".

Zohar notes several important factors worth mentioning: firstly, Gardner informed them that, "The USKPA will take immediate appropriate steps to remedy this technical defect"; secondly, Gardner assures them, "the USKPA continues and has had no interruption of service, nor does it have any concerns about the legality of its actions"; and thirdly, the situation is reversible by means of a renewal filing and payment of back fees since the time it was voided. The USKPA was voided on March 1, 2005, as there has never been any payment and/or subsequent filing of any annual report or any other document after its initial act to register. That’s about 12 years ago. And while correctible, this does not take away from the astonishing fact that for the past 12 years, US KP certificates have been issued by an entity not recognised as a registered body by the state; furthermore, US KP certificates have been issued by the USKPA, while in fact the only entity that was ever registered was the USKPAI.

Coming on the heels of the last Diamond Intelligence Briefing, which underscores that nobody, or at least not the government charged with doing so, is in fact keeping stock of empty KP certificates; that while US Department of State carries the full responsibilities for oversight of the USKPA, they have shirked and delegated this responsibility to the directors of the USKPA – Cecilia Gardner and Martin Hochbaum – who assist both the industry and the US government to implement what are, in fact, fully governmental responsibilities, and do so on a "strictly voluntary basis and without compensation." By way of anj exclamation point, Zohar adds, "This is the same government that is devoting enormous financial resources to telling other countries how to run the Kimberley Process while neglecting to keep its own house in order.” The potential for issues such as identity theft and loss of credibility are myriad. It is fortunate they did not come to pass.