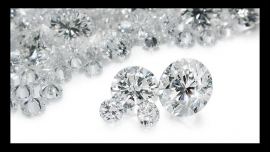 Citing data from its RapNet Diamond Index (RAPI), Rapaport News writes, "Diamond manufacturing profits were squeezed in January amid strong rough demand while polished prices softened." Despite a disappointing holiday season, demand of rough is strong as jewelers will need to restock after the holiday season. This is demonstrated by De Beers' First Cycle sales of $720 million, its largest sight since July 2014. Concerning prices, they report, "The RapNet Diamond Index (RAPI™) for 1-carat diamonds fell 0.9% in January and was down 6.8% from a year ago." PolishedPrices confirms the trend on a year-to-year basis, noting, "the overall index is 4.4% lower than this time last year," but it sees January prices trending upward. For the final week of January, "The strongest gains came from the Fine 1.0 carat range, which added 3.7% to record its highest level since October last year," and they note that Fine and Commercial stones are up 6.1% and 3.0% respectively in January. "There were gains across all of the benchmark categories, except for Fine 0.5 carats, which slipped 0.6%."

Rapaport further notes, "polished supply is projected to rise in the first quarter following a spike in rough demand. Manufacturers ended last year with low inventory, having reduced production since Diwali, and are ramping up operations to satisfy an expected rise in polished trading." However, they then note, "Rough supply is not supported by activity in the polished and jewelry retail sectors. Signet Jewelers and Tiffany & Co. reported disappointing holiday sales as middle-income consumers shifted to lower price points and stores struggled to compete with ecommerce." In effect, Rapaport is warning that another disconnect between polished manufacturers, retailers and rough suppliers is on they way: "Polished suppliers are expected to resist buyers [retailers - ed. D.L.] pushing for deeper discounts following the increase in rough prices. That may be challenging as additional supply becomes available." Once again, manufacturers seem to be squeezed between more expensive rough and sluggish retail.