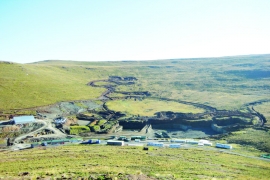 Australia's Lucapa Diamond mining company has made 70 percent acquisition of the high-qualiy advanced stage Mothae Kimberlite project in Lesotho for US$9 million dollars, the company reports. This comes after the Government of the Kingdom of Lesotho awarded the advanced Project to Lucapa following a competitive international tender process. Mothae has existing infrastructure and camp in place including a diamond processing plant, which Lucapa says should enable it to bring the mine into production within 12 months under staged low-risk development strategy. They view it as a complementary fit with the Lulo mine which has a similarly high-value diamond production. Shares in Lucapa Diamond Company, suspended last week as the deal was pending, were higher after the miner announced the  of a diamond project in Lesotho for $US9 million.

Lucapa says Mothae is a high-quality advanced kimberlite diamond project for the following reasons: Mothae has an indicated and inferred resource of one million carats and is just 5km from Letšeng, the world’s highest dollars-per-carat kimberlite diamond mine in the world. Trial mining has proven that similar to Letšeng, Mothae hosts large, premium-value and Type IIa diamonds, including individual stones up to 254 carats and gem-quality diamonds which have sold for up to US$41,500 per carat. Infrastructure in place enabling production within 12 months. Phase 1 is supported by a robust mining plan with 18 month pay-back. Phase 2 is still to be scoped. They also cite a very competitive acquisition price of US$9 million (for 70% interest) payable over 10 months. Compares with historical development spending of ~US$36 million

Lucapa managing director Stephen Wetherall said the acquisition was in keeping with the company’s strategy of continued growth as a diamond producer and explorer. “There is only one thing better than owning one diamond mine that produces large high value diamonds – and that is owning two,” he said. Lucapa already holds a 40% interest in the Lulo diamond project in Angola, which generated gross sales of $70 million in 2016. Mt Wetherall said Mothae represented a compelling opportunity for Lucapa to grow its cashflows from a second diamond mining operation. “The Lucapa management team has extensive experience in southern Africa, including in Lesotho and at the Letšeng mine, which we will leverage off in our Mothae development plan,” he said. The Government of Lesotho will retain a 30% stake in the project. Lucapa also has diamond projects in the West Kimberley and Botswana. Shares in the company were up one cent, or 2.56 per cent, to 40 cents at the close after touching an earlier high of 42.5 cents.