ALROSA’s Diamond Output Drops By 2%, Plans To Increase In 2017 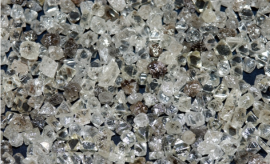 Preliminary sales figures indicate 40.1 million carats of diamonds were sold. Rough diamond sales have steadily fallen due to India’s demonetization, in the fourth quarter sales amounted to $849 million. Yury Okoemov, ALROSA Vice President says that, “sales results in December in the small-size segment still reflect weakening of small and middle-size Indian diamond-cutting companies due to the monetary reform underway in this country. Activity in other market segments corresponded to the seasonality of demand and our expectations.”

Revenue from rough diamonds sales are set to reach at least $4.3 billion, approximately 26% higher compared to the similar period of 2015. Meanwhile, CEO Andrei Zharkov said in an interview to an internal edition of Prime News last week that Alrosa still intend to increase diamond output by 5% in 2017. “The market volume recovered in 2016, so we plan higher production for 2017. Besides, the company keeps its strategic goal to produce about 40 million carats annually in the next few years,” he said.