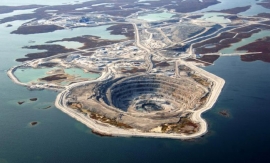 Mountain Province Diamonds Inc. announced their production results from the Gahcho Kué Diamond Mine for the fourth quarter which ended on December 31, 2016, the mine is a joint venture with De Beers (51%), located in Canada's Northwest Territories. In addition, they announced the completion of their first diamond sale held between January 16 and 25 in Antwerp, Belgium.

Reportedly 49,420 carats were sold during the first diamond sale in Antwerp, accounting for US$6.27 million, which represents an average price of US$127 per carat. Approximately 75% of the parcels offered were sold, with the remaining lots being withdrawn due either to no bids or unacceptably low bids being placed. This is a consequence of a decline in demand for smaller, lower quality diamonds, in large part due to cash crunch caused by India’s demonetization. The company's next sale is scheduled to commence on February 20, 2017.

"Our first diamond sale was well attended with 96 companies bidding for individual parcels,” said Mountain Province President and CEO Patrick Evans. “The introduction to the market of first production from a new mine is a price discovery exercise with buyers naturally cautious. As our production volumes increase and the market becomes more familiar with our diamonds, we expect interest to grow. The level of demand for our smaller lower-quality diamonds was disappointing, but we expect improvements as Indian liquidity issues abate."