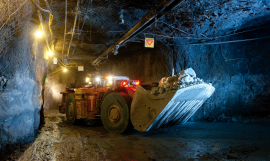 Revenue increased 48% to US$228.5 million (H1 FY 2016: US$154.0 million), due to increased sales volumes, namely:  Diamonds sold rose 47% for the period to 1,910,113 carats (H1 FY 2016: 1,303,051 carats). Petra notes, "In line with past years, H2 is expected to be a stronger sales period, due to the timing of tenders being weighted towards the latter half of Petra’s financial year. They noted rough diamond prices were flat at $120/carat during H1 FY 2017 on a like-for-like basis, in comparison to average prices of $125/carat throughout the year 2016. In terms of production and operations, Petra's underground expansion projects remain on track with Finsch’s Block 5 SLC and Cullinan’s C-Cut Phase 1 delivering initial production during the Period as evidenced by the improving ROM grade profiles.  Commissioning of the new Cullinan Plant to commence towards the end of Q3 FY 2017.

Johan Dippenaar, Chief Executive Officer, commented: “Due to the increased contribution in H1 FY 2017 from undiluted ore, we have delivered strong operational results, reporting significant increases in production and revenue. We continue to advance our expansion programmes and, from this point onwards, will see a meaningful reduction in Capex as the capital projects, which were first set out in 2009, come to fruition. Safety remains our highest priority at Petra and we are placing renewed focus on this vital area and relentlessly striving for a zero harm workplace.” The latter follows another reported fatality during H1 FY 2017, in addition to those reported in Q1 FY 2017.