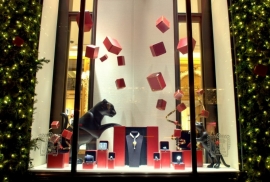 Rob Bates of JCK has gathered his sources to put together an overview of holiday jewelry sales and says that, "The data shows a mixed, but not altogether downbeat, picture. This year, holiday results appear to be all over the map—some independents did great; others recorded a 1 to 2 percent gain, which has become standard for many since the recession. In a surprise, we also saw mixed results at the mass-market level as well." Below are a few notable takeways from the information JCK has gathered.

Firstly, according to the final estimates reported by Mastercard SpendingPulse - a service providing analysis of consumer trends as well as forecasts of expected market conditions - retail sales grew 4.0 percent in the U.S. during the 2016 holiday season, exceeding initial expectations. During this same period (Nov. 1 through Dec. 24), online shopping sales grew 18.9 percent, up from 17.5 percent growth last year. The overall picture for US jewellery Retail based on the Mastercard Spending Pulse report showed sales up for the year at +0.4%. Holiday sales were uneven by distribution channel with Independents showing positive growth of 1.4% in December while overall jewellery retail showed 0.7% positive growth.

Meanwhile, De Beers CEO Bruce Cleaver said at the Forevermark New Year’s cocktail party, "Our recent survey amongst 68 of our Forevermark Jeweller accounts showed that overall diamond sales for the holiday season were +6.4% over the same period in 2015 and +7.6% for the year as a whole. And following Forevermark’s growth on the global stage last year, we are also confirming our position as the world’s fastest-growing diamond brand, having opened our 2,000th retail door globally last month."

Meanwhile, as reported earlier, Signet Jewelers Limited, the world's largest retailer of diamond jewelry said its same store sales had decreased 4.6% during the crucial period, compared to an increase of 5.1% during the corresponding period a year earlier. At the time, Bates wrote, "Executives blamed [the decline] on a decrease in mall traffic, a tough jewelry market, and technical problems at its Sterling division e-commerce sites." CEO Mark Light said, “E-commerce in the jewelry industry increased double-digit percentage, while in-store [sales] decreased mid–single digit percentage." Elsewhere, Bates ays the Birks Group U.S. comps were up 16 percent.

Finally, U.S. Department of Commerce November jewelry sales were said to be up 6.8 percent. Bates adds that "This about matches the government numbers for jewelry sales for most of the year."