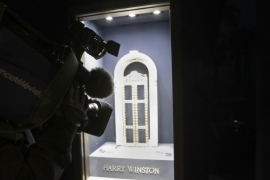 An armed man walked into a Harry Winston jewelery shop in Cannes without opening fire, before walking away with €15 million ($16M) in diamonds. A man in his thirties showed up at the store on January 18 at the store on the city's famed Croisette waterfront promenade and initially passed himself off as a customer. "He asked to see diamond ornaments on behalf of a sponsor. The saleswoman was suspicious and gave him a catalogue," the prosecutor said.  His face uncovered, hidden only behind sunglasses. He then pulled out a 7.65-calibre automatic pistol and a grenade and ordered the two saleswomen to open the display cases, the prosecutor said. The investigators did not know whether the grenade was real. One of the guards, who was nearby, was forced to lie down. Nobody was injured during the hold-up, said the Cannes police station. Images of video surveillance are being examined by the Nice judicial police who resumed the investigation to try to find the author of this holdup. The individual set out on foot from the jewelery store without the neighborhood suspecting anything, as no shots had been fired.