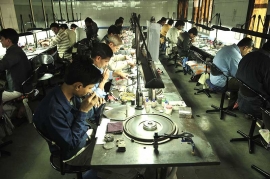 Diamond traders from all around the world are on their way to Botswana for one of the biggest annual sales as the $14 billion industry attempts to recover from India’s demonetization. India processes as much as 90% of the worlds rough diamonds with the purpose of being cut, polished or traded, but the steady supply of diamonds for its manufacturing industry has come under pressure as a result of the currency crisis. “The Indian demonetization program is showing how much of the polishing industry is still a cash business,” said Richard Chetwode, an industry consultant and former executive at Dominion Diamond Corp. and Gem Diamonds Ltd.

At its final sale of 2016, the cash crisis led De Beers to allow its customers to refuse boxes of cheaper stones even if they had already used up their allowance of deferral. De Beers also permitted buyers to reject lower-quality stones from pre-mixed assortments of diamonds. According to people who prefer to remain anonymous, De Beers has made concessions for the second consecutive buying round in order to support the slowly-improving market.

ALROSA’s rough diamond sales have fallen steadily since India introduced its currency policy, from $430.8 million in October to $245.6 million in November and $173 million in December, as the monetary reforms hit small- and mid-sized Indian diamond-cutting companies. According to the Gem & Jewellery Export Promotion Council (GJEPC), India's imports of rough diamonds in December fell 28% in volume and 4.7% in value to $1.4 billion compared to December 2015.

De Beers as well as Anglo American will continue to allow some leeway to its customers at this week’s sale, however they will be less flexible than in December, which may suggest that the worst has passed for the broader market.