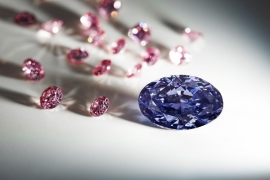 High price purchases of 'fancy colored' diamonds, once the almost exclusive domain of collectors and connoisseurs, have become more commonplace in recent years, writes The Wall Street Jounal, as investors seek to take advantage of soaring appreciation of these rarest of stones. "Prices are being driven higher by investors who are hoping the hot market stays hot, many of whom have been disappointed by returns from other assets, say industry insiders. Over almost eight years, from the start of 2009 to Sept. 30, 2016, the latest recorded data, the price of pink diamonds has increased nearly 180% and sits at a record high. Blue and yellow diamonds are up by around 70% and 90%, respectively, over the same period", according to the Fancy Color Research Foundation. The annual Wealth Report published by London-based property broker Knight Frank says that prices of colored diamonds have risen 122% in the last decade.

WSJ spoke with Eden Rachminov, managing partner of Rachminov Diamonds, one of the world’s biggest cutters of colored diamonds, who told them there has “absolutely” been a growth in the number of investors buying colored diamonds. “The price of red diamonds is very high. That creates an attraction,” drawing in professional investors and funds, typically investing on behalf of wealthy clients. "Record auction prices highlight the soaring demand over the past year," referring to the 14.62-carat “Oppenheimer Blue", the largest fancy vivid blue diamond ever offered at auction, which set a world auction record, selling for more than $58.2 million, and the "Blue Moon" diamond that sold for a record $48.26 million in 2015, the highest price ever per carat. These are not the only examples, nor is blue the only hot color. The 2016 Argyle Pink Diamonds Tender achieved the highest average price per carat since the Tender began in 1984, although the Anglo-Australian miner did not disclose the price.

Daniela Mascetti, senior international specialist at Sotheby’s jewelry division, told WSJ that in recent years, investors picked up on the rarity of colored diamonds. According to the GIA,only one out of every 10,000 diamonds is a fancy colored diamond. "Some, such as red diamonds, are so rare that only a handful are known to exist. The GIA says its laboratory didn't see a single red diamond from 1957 to 1987. Now," the authors write, "growing demand for colored diamonds has been so strong that brown diamonds, once considered mostly for industrial use, are sold as 'champagne', 'cognac' or 'chocolate' diamonds and can fetch several thousand dollars a carat." As any expert will say, however, it pays to be cautious and highly informed; the market is opaque, supply is tightly controlled, and only privileged buyers even have access. Mr. Rachminov, one of these authorized dealers whose company has an agreement with Rio Tinto for a consistent supply of small pink diamonds, says “In bad times, it’s a very good place to keep your money. In good times, it’s something to enjoy.”