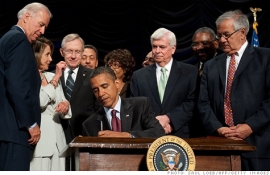 "As a leading member of the U.S. Jewelry industry, we are writing to express our support for Section 1502 of the Dodd-Frank Wall Street Reform and Consumer Protection Act and the corresponding Securities and Exchange Commission’s Conflict Minerals Rule. We do believe that the due diligence and traceability measures required by Section 1502 are an essential component to breaking the links between conflict and the minerals trade in eastern Democratic Republic of Congo." So begins Richline Group's statement of support for the continued implementation of the Dodd-Frank Act - introduced by the Obama administration to, among others, prevent the excessive risk-taking that led to the financial crisis - which president-elect Donald Trump is pledging to dismantle. It notably mandates disclosure of whether companies use “conflict minerals.”

"This legislation", the statement continues, "has helped strengthen our own responsible supply chain management practices. The major jewelry industry association, The Responsible Jewellery Council, has modeled conflict minerals guidance from this precedent." They note that the Act has helped initiatives that support responsible sourcing from DRC. "Since the implementation of the regulation in 2013, we believe there has been much progress both on the ground in Congo and globally." As JCK's Rob Bates clarifies, "Since Richline is owned by Berkshire Hathaway, a public company, the provision says the manufacturer must report whether it sources gold and tungsten from the Democratic Republic of Congo and surrounding areas."