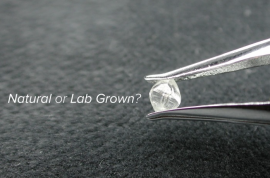 Avi Krawitz of Rapaport News sat down with Joseph Kuzi, CEO of EGL Asia and director of Diamond Services, a Hong-Kong based synthetics testing facility, to talk about the phenomenon of undisclosed synthetic diamonds. He heard that the technology behind and production of synthetic diamonds is increasing rapidly, and just because we do not hear about every instance where undisclosed mixing of synthetic and natural diamonds is discovered, does not mean it is not widespread. Courtesy of Avi Krawitz, we bring you a few salient quotes from Kuzi. The entire interview is available here.

Rapaport News: How do you view the threat posed by synthetics to the natural diamond market?

Kuzi: I recognized the problem of non-disclosure when I started studying synthetics in 2011. Now it’s an epidemic. Unless the industry finds a solution we’ll follow the path of pearls, with a flooding of synthetic goods to the market which will depreciate the value of natural diamonds. It’s no longer a matter of consumer confidence; it’s now a question of value. Consumers won’t be able to understand the value of the diamond they’re buying.

Rapaport News: Is there sufficient awareness of the issue in the industry?

Kuzi: There’s a lack of understanding about synthetics. When we introduced our detection machines in 2013, the industry was basically in denial. People would say synthetics are being grown only in specific categories and won’t affect them since they don’t deal in those goods. But, we’ve seen synthetics with D to M color, VVS to I1 clarity, in all shapes and sizes.

Rapaport News: What should the trade do to protect itself from the threat of synthetics?

Kuzi: Companies need to test all their stock. Doing random checks or sampling is not enough because it’s not a full-proof method. We’ve had samples of 100 pieces where we found synthetics in four pieces and we’ve had cases where 50 percent of the goods were synthetic.

Rapaport News: What’s your message to the trade?

Kuzi: Know what you’re selling. Test all your stock, whether it’s new supply coming in or goods returning from memo. You have to genuinely be able to tell a customer what you’re selling is natural. We haven’t seen a major U.S. lawsuit just yet, but it will come. And, it will be a rude awakening for the industry because consumer awareness will increase and people will say they’re not touching either product. That’s why full disclosure is also in the interest of synthetic suppliers. Unfortunately, I don’t see an effort on their part to raise awareness about non-disclosure. In general, companies need to realize that as long as it takes to build their brand, it can take one undisclosed diamond of 0.01 carats to destroy it.