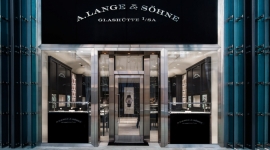 Richemont, the second largest luxury goods company in the world, just shared their trading update for the third quarter ended December 31 2016, reporting an overall 5% uptick at constant exchange rates to $3,292.5 million and a 6% rise at actual exchange rates. In Europe, sales increased by 3% in the third quarter, in contrast with the 17% decline registered in the first six months of the year. The report suggests the increase was primarily due to local sales and tourist purchases in the United Kingdom as well as strong jewelry sales across the region.

The Asia Pacific region was also able to report a 10% growth in sales reflecting improved sales in mainland China and Korea. The Americas region grew by 8% partly due to the reopening of the Cartier Mansion in New York; similarly, the reopening of Cartier’s flagship store in Tokyo limited Japans decline to 1%. The Middle East and Africa continue their current subdued trend. Retail sales grew by 12%, compared to the decline of 5% from the previous 6 months. This was due to an increase in demand and sales of jewelry, watches and the reopening of the two Cartier stores. The rate of decline for wholesale sales slowed to low single digits.