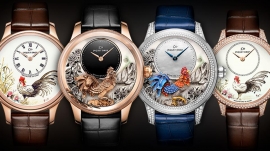 Forbes created a list of the top luxury watches designed to celebrate the upcoming Chinese New Year, which beings on January 28, 2017. The year of the Rooster will be captured by Ulysse Nardin, Jaquet Droz, Chopard, Piaget and Vacheron Constantin – brands that are known for combining Swiss craftsmanship with Chinese culture.

The rooster is the 10th sign of the 12-year cycle in the Chinese zodiac, which was previously honored in 2005. Confident, honest and proud, roosters are the epitome of fidelity and punctuality, but tend to prefer being the center of attention – attributes crystallized in his announcing of the dawn while proudly puffing his chest.

What is exceptional about these 6 watches is that each brand has depicted the rooster in a unique fashion, making them true collectors’ items.