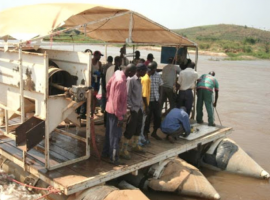 The Bakwanga Mining Company (Societe Miniere de Bakwanga, or MIBA), a joint Belgo-Congolese company based in Mbuji-Mayi, Kasai-Oriental Province in south central DRC, denied having recovered an 87-carat white diamond worth more than $6,000,000. The discovery of the precious stone was announced Wednesday, January 11 by the Congolese News Agency (ACP), among others. According to the ACP dispatch, the stone derived from a kimberlite sieving at MIBA's new kimberlite cleansing facility (NLK), but the mining company says that this cleaning facility has been abandoned for about ten years. In a statement, the company clarifies that, "MIBA nevertheless wishes to reaffirm that it holds in its safes a 146.24 carat stone produced on 21 December 2016, which will be sold in accordance with legal procedures when market conditions permit."

MIBA has been a company in crisis for many years. The report of the company's biannual meeting last October in Mbuji-Mayi indicates that Bakwanga Mining is collapsing under a social debt estimated at more than 150 million US dollars. But the leaders of the mining company want to be reassuring, promising an increase in mining production. The ACP article suggests, "By means of two gems, the company can gradually revive itself with the purchase of production tools and the payment of its personnel before the intervention of lenders." And perhaps therein lies the rub, as the company cannot pay its staff, buy new equipment or repay debts if there is no revenue from the sale of the inexistent diamond. Rumors also abound in Congo that the company's money is regularly embezzled by President Joseph Kabila and his collaborators, but this is only speculation.

Approximately 80% of MIBA's stock is owned by the Congolese government, with 20% owned by former Umicore subsidiary Sibeka, which in turn is owned by Mwana Africa plc, which operates the mines. Between 2002 and 2006, MIBA produced an average of 6 million carats of diamonds per year, but operational difficulties have reduced its production to around 500,000 carats a year now. Back in 2015, Mwana Africa Plc said it would cost almost $100 million to realize plans to raise production at its venture with the Democratic Republic of Congo’s state-owned diamond miner more than 10-fold. MIBA has the potential to increase annual diamond output to as many as 8 million carats from 500,000 carats now, Mwana Chief Executive Officer Kalaa Mpinga said in an interview with Bloomberg TV Africa. The operation “will have to change its production model significantly” to target deposits found in kimberlite rock, Mpinga said. “There’s going to have to be a shift from alluvial mining,” he said, referring to deposits found in gravel and sand. “We are confident that it has a large resource and that it can be done.”